Less than 5 years ago, Apple brought interactive applications from unwieldy computer screens on to the portable iPad, triggering a hype and opening up revolutionary new avenues in pharma communication.
This caused a lot of initial excitement and questions such as “What, you aren’t using iPads yet?” were being asked, but in some companies a certain disillusionment soon set in: “You know, we don’t really need iPads just to view PDFs.” Meanwhile, the trend is moving towards developing more benefit-oriented measures and weighing up the necessary effort against the desired effect.

A good mechanism-of-action film presents its content in a specifically constructed didactic order, underlining the actual key message with this chain of reasoning. At the end of the video, the viewer has been shown all the relevant information. This approach may well be practical; however, the viewer of such a film remains a passive consumer of content.

By contrast, interactive applications are designed to turn the user – be they a physician or a presenting sales rep – into a participant who actively seeks out the relevant information. This is where the large potential of interactive applications lies: Through trying and exploring, any knowledge acquired is retained much better and for longer, thanks to the powerful emotional impressions. Ideally, the fascinating multi-media worlds impart knowledge almost effortlessly.

When planning the options for interaction, however, one thing should be kept in mind: Because the user always has to become active to get to the information, there is a danger of overlooking or not bothering to access some content. So there is no guarantee that all available information will be viewed. A small chance exists that an incomplete or distorted image will develop in the mind of the viewer, diluting the key message or even calling it into question.

Moreover, all of these considerations assume an alert and interested user who wants to become active. But what if the physician is stressed or tired? What if they just want to learn something without unduly exerting themselves? Or: How do you reach a reticent visitor at a congress who is not willing to be drawn into conversation straight away? In these cases, an easy-to-consume film is the better alternative.

Apart from aspects of content, it should be noted that some training in handling the iPad will often be necessary before it can unfold its full potential in a sales visit. A good presentation will quickly fail if the presenting sales rep is a technophobe. In this case, technology gets in the way of human talent. Please keep in mind that sales are made by interactions between people and not just by interactions on the iPad.

But if the sales rep is well-trained, the distance in the interaction with the physician can be reduced with a simple “Why don’t you have a go now?” allowing the iPad to unfold its full efficacy.

The advantages of interactive iPad applications are mobility and instant readiness for use, both in presenting and in self-study. However, the use of iPads by your sales reps is a large, long-term infrastructure project with many facets, such as procurement, choosing and distributing software, user administration, security, integration into company-internal IT structures, staff training, updates and version control, as well as kicking off suitable content projects in order to recoup investment.

Tablet apps should always be in line with the overall strategy of the company. Therefore, implementing independent and focused short-term campaigns is more difficult. For this reason, particularly in markets with low or insufficient tablet penetration, a short film about the relevant subject is the more sensible and economical alternative.

The interactive application is also always tied to the appropriate device. In an unevenly equipped user group, this causes additional costs.  Films can be used more flexibly in this regard, from a tiny smart phone display via computer monitors and classic television sets to mega-screens at congresseses.

In general, it can be said that interactive applications are more complex to create and maintain, and thus are also more expensive. This statement, of course, depends heavily on extent and type of the interactive application. However, assuming that you do not want a mere PowerPoint presentation riddled with bullet points on your iPad, but the experience of a world capable of wowing the audience with impressive images, well-thought-out didactics and a user guidance that is easy as pie, some additional steps are necessary in comparison to a film:

Multiple use for a good ROI

Producing a mechanism-of-action, mode-of-disease or study video always requires familiarizing oneself with the medical, biochemical and pharmacological contents, as well as creating suitable image universes that get these contents across in an easy-to-understand manner. Accordingly, in the context of consistent marketing material, most of the time it makes sense to use these preparations to develop still images, illustrations and slide kits. In this aspect, the creation of interactive applications resembles that of films. Particularly if there is no pre-existing material, we would recommend starting with the production of a film, testing the contents and then going on to develop interactive applications, drawing on the image universes already created. Individual sequences of the film can also be used for further marketing activities such as talks or lectures, for your corporate website, e-mail marketing campaigns or simple illustrations. In this way, “spin-off” products can be created quickly.

MRL approval plays an important role for all marketing materials in the pharmaceutical industry, be they interactive applications or MoA films. The internal approval process in pharma marketing is, however, often much easier for a mechanism-of-action film than for an interactive application. Indeed, we have heard of product managers physically sending their iPads to the person or body responsible for approval, in order to allow them to check the newly created applications.

CONCLUSION: Both interactive tablet application and conventional MoA film are very effective tools in their own right and both have their advantages and disadvantages.  An interactive project provides great possibilities. But for any concrete use, it should be examined closely whether the relation of effort and desired effect is favorable.

Should you have any comments or questions, please do not hesitate to use the comment function or to send us a personal e-mail.  Alternatively, you can easily arrange a WebEx meeting with us to discuss your specific circumstances. 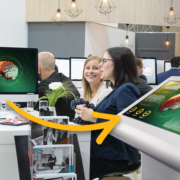 How to develop engaging interactive presentations for conference booths with PowerPoint